Hooray for the 100th day!
We had ours yesterday.
Or, to be exact, we made yesterday be the 100th day.  We’re pretty sure it was really today, but Wednesdays are early dismissal days which means it’s the perfect time to get the kids all riled up and hopped up on sugary fruit loop necklaces.
Oh?  You were spinning in a circle and then you fell down?  Well, the bell rang!  See you tomorrow!
We’re thinkers at my school.
I told my teammates how I always prep the fruit loops necklaces and while one knew all about it (I got her onto it a couple of years ago), my other teammie had no idea and thought I was a genius.
I say that humbly.
But if enough people agree . . .
Anyway . . .  😉
If you haven’t had your 100th day yet, maybe this will work for you.  And if you already had yours, well more power to you – you’re practically on summer vacation, you lucky duck, I really don’t like you anymore.
I used to cut the string (I have a sample one that I keep from year to year that fits 100 fruit loops) and then I would tape off the ends.
I should rephrase the I prep it sentence and say I have a parent volunteer prep it at home.
But then the kids would string their fruit loops and they would fall right off.
Right off, I said.  Onto the dirty carpet.
So then I got smart and taped only one end, but then tied off the other end with a fruit loop so it had a stopper (or an anchor or whatever).
I thought I was so smart back then.
BUT THEN, all of the strings would get tangled before I could even start passing them out so I spent the majority of the time telling the kids to eat their fruit loops while I tried to untangle 32 strings.  By the time everything was untangled, all we had left was kids strung out on sugar and no more fruit loops with which to make a necklace.
It was a problem.
AND THEN.
THE END ALL, BE ALL, THIS HAS BEEN THE BEST THING EVER SO GET READY IDEA CAME INTO MY BRAIN.
MAYBE YOU SHOULD SIT DOWN.
I still have a volunteer measure the string, tape off one end, and tie a fruit loop to the other end.  That has stayed the same.  Although, my teammate used curling ribbon for her string yesterday, and I am so doing that next year.  That eliminates taping off one end.  I just keep using this one roll of kite string that I have magically never run out of from year to year . . . 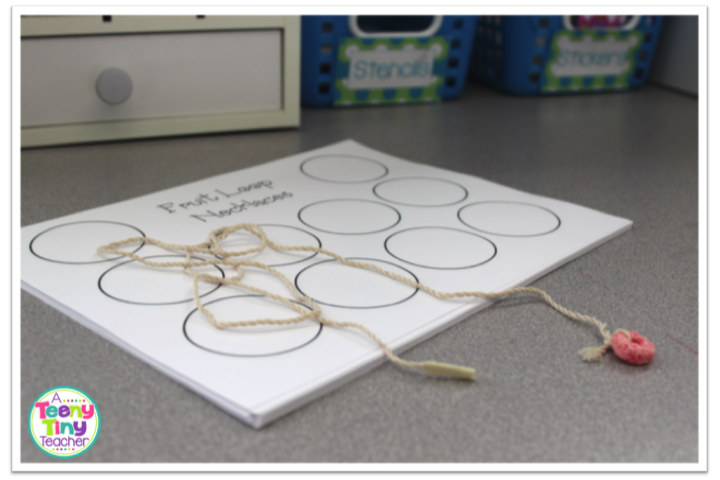 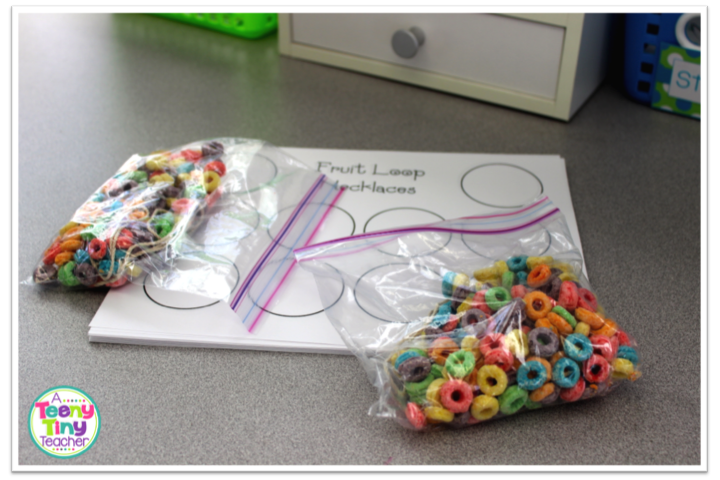 When it’s time to start the necklaces, you just put a baggie on each desk.
Everything they need is inside!
AND THE BEST PART?
THE KIDS HAVE A BAGGIE IF THEY DON’T FINISH THEIR NECKLACE!
YES!
I KNOW!
My kids used mats to sort ten fruit loops into ten circles to be sure they had 100 before starting.  I’m sure that’s how you do it, too.  They were allowed to eat broken ones, ones that were stuck together, and any that they could sneak without me seeing.  🙂  If they had left overs in their bag, they got to keep them.  If they needed more (no one did – my volunteer did a great job), then I had a left over stash for re-fills.
If you need a mat, you can get mine {HERE}.  It is not fancy.  I don’t laminate them.  I make a set of copies each year since they get so sugary and dusty and some kids lick them.
Really.
So we just throw them away at the end.
So there you go.
That’s my tip.
That’s all I’ve got.
Well, I also have left over fruit loops for munching on during the school day which is a huge bonus and the number one reason I love the 100th day.
🙂
PS Next year, we’re talking about having a 120th day instead.  We are so Common Core.  😉
« Talk About It Tuesday
Five for Fraturday »