I survived the first FULL week of school and feel as if I deserve a medal or a glass of wine or a summer vacation.

My feet are killing me and I am sick to death of talking about stuff that last year’s class already knows everything about because they were TRAINED and then for some dumb reason, I sent them off to second grade!!!! 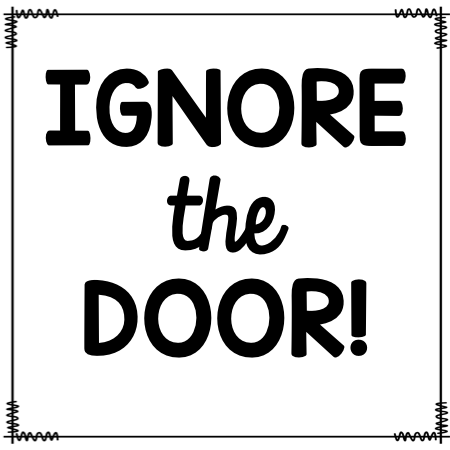 Here’s something we worked on this week.

Because every.single.time we are on the carpet and I’m teaching (not a real lesson, not yet, I just can’t seem to get past something along the lines of we’ve only been on the carpet for 30 seconds, please turn around, stop playing with your velcro shoes, sit flat for me please, don’t pick staples up off the carpet and hand them to me, don’t worry about her loose tooth, she’s fine, no, it isn’t time for recess yet, we’ll talk about your basketball game in a minute ETC ETC ETC) . . .

Because every.single.time we are on the carpet and I’m teaching and the CLASSROOM DOOR OPENS (heaven forbid), I’ve got a multitude of students getting up on their knees, swiveling their heads to the left and then shouting out or pointing with their actual arms out straight and their pointer fingers pointed that SO AND SO JUST WALKED IN or LOOK, MRS. OLDHAM or CAN I GO TO THE BATHROOM NOW?

And you’d think my door wouldn’t open that much BUT IT DOES with either students coming back from the bathroom, OTHER TEACHER’S STUDENTS COMING BACK FROM THE BATHROOM AND OPENING OUR DOOR BY MISTAKE (the look on their face is actually priceless) an upper grade “runner” who is delivering a water bottle or a lunch box or a sweater or WHO KNOWS WHAT or the bilingual aide that I’ve been trying to track down or or or or or or

SOMEONE KILL ME NOW.

So one day this week (or maybe every day) we practiced a new routine, rule, procedure, what-have-you called IGNORE THE DOOR.

ESPECIALLY WHEN MY NEW PRINCIPAL WALKS IN AND I’M IGNORING HER AS HARD AS I CAN BECAUSE I’M STARING AT MY KIDS AS IF I HAD LASERS IN MY EYES ZAPPING THEM INTO SITTING FLAT AND LOOKING ONLY AT ME WHILE SAYING NOTHING.

We literally took turns having students go outside and come back in just so we could practice IGNORE THE DOOR. 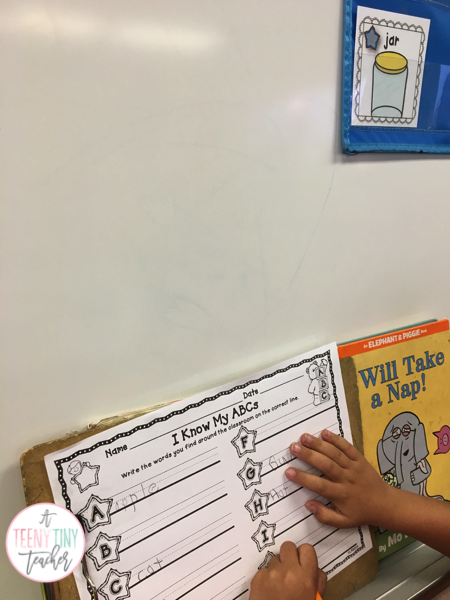 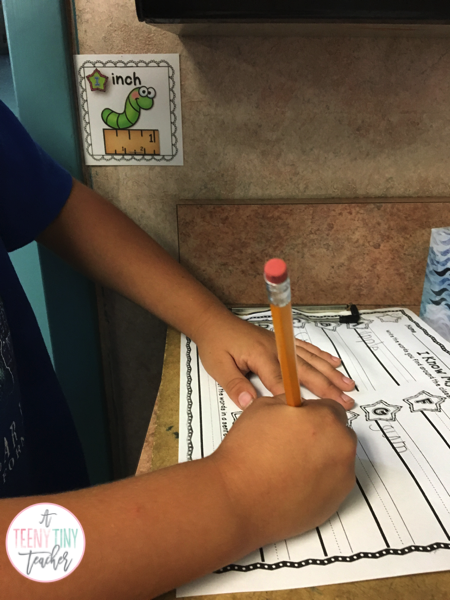 I introduced Write the Room whole class this week and that was a good 15 minutes of HAPPINESS!!!!!

I used Teaching with Love and Laughter’s pack   because it is simple and straight forward.  My kids went nuts for this (as they always do) and have asked every day since when we are going to do it again.

I’m introducing one center per day WHOLE class and then we are ALL doing that center at the same time so that when we finally break into actual center groups, everyone will know how to do everything.

I’ve blogged about each center before and how I actually do this so if you need ideas, read these posts:

I have tons of Write the Rooms that I switch out as the year goes by, but I primarily use: 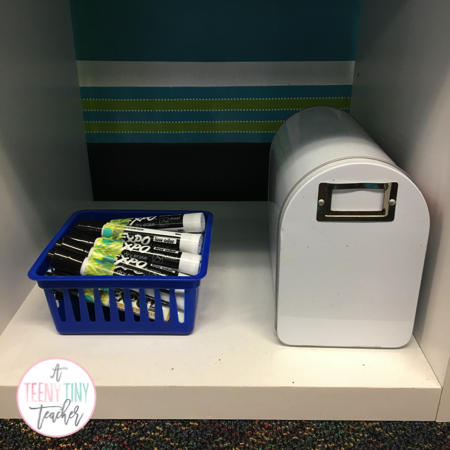 I passed out whiteboards and BRAND NEW expo markers this week and my kids went crazy for these, too.  I told my kids how expensive the markers are and so we practiced putting the cap back on (HEAR THE CLICK!!!!) and writing gently so as not to make the point DISAPPEAR inside the marker (I have examples that I keep just to show the kids) and on and on and on and on.  And then I say that this marker has to last for approximately three months (which they have no clue how long that is) because they won’t get a new one until the end of October and blah blah blah, I seriously am sick to death of talking.

Their personal marker is for them to use when they finish all of their work and want to work on their whiteboard.

But I know BEYOND A SHADOW OF A DOUBT that I will have at least two students lose their marker, lose their cap (which I have “found” caps in a drawer in case they need one), or make the point disappear.

In fact, this year, IT HAPPENED within 30 minutes.

And I’m not kidding.

I keep a set at the carpet that I have MARKED as MINE.  They have turquoise and lime green washi tape on them to match my classroom because I have issues and we’ll talk about that on another day.

So when we need whiteboards for a lesson, students without a personal marker can grab one of these.  But they cannot keep them.

After our lesson, they MUST put them back so that we will have them for the next lesson. 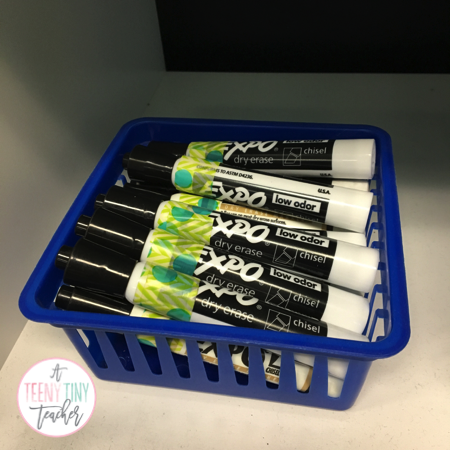 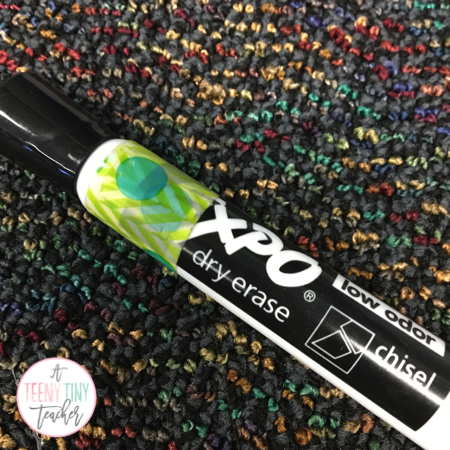 And I seriously don’t even have to worry about a kid trying to sneak off the tape because the other kids will rat him/her out faster than you can say EXPO.

And I don’t have to worry about a kid accidentally taking one back to their desk or putting one in their pencil box because first graders will tell on someone like it’s their JOB.

This whole idea is not mine.  I saw it somewhere and I have no idea where and so I thank you. 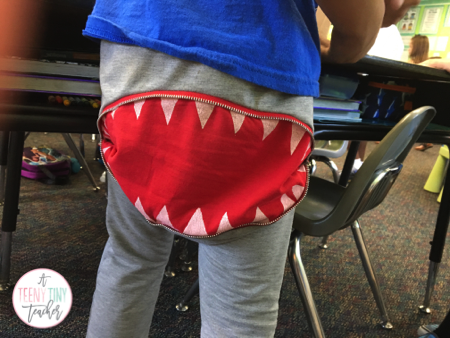 This guy is hilarious!  At first, I was a little worried about him in a he is gonna give me a run for my money, he is THE ONE, oh no, this is gonna be hard but now that I’ve gotten to know him a little, I think he is going to be a lot of fun.  A LOT OF WORK, but a lot of fun.

He said I could take this picture.

He can zip the Shark mouth closed if he so desires and then he has a big wide pocket to hold things.

Let’s not talk about the things it could hold, if you know what I mean.

I’m telling you, these pants made my whole day. 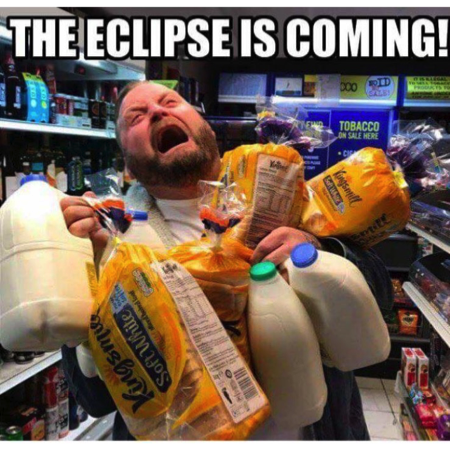 I saw this on my community Facebook page and died laughing.

I mean, DO WE EVER LOOK DIRECTLY AT THE SUN?

We have to stay inside for our first recess.

I want to go out and see the eclipse, I think it’s important, I think it’s SCIENCE, but I guess the risk of someone looking directly at the sun is just too great.  I did see a little article about someone who did this back when he was a kid when the last eclipse happened, and he is partially blind or something because of it so I guess it could happen.

But honestly, really and truly, we will miss first recess and then go out at lunch time.

And the sun will be there.

So I’m just kind of confused by the whole thing, but don’t leave any comments trying to enlighten me because I’m not asking to be educated either.  Hahahahaha!

I’m just saying this picture CRACKED ME UP and THAT IS ALL.