It’s a wonder I’m awake!  Actually, that’s not true — I’ve been struggling with my sleep schedule lately and I don’t know why!!  It’s the darnedest thing because you all know how much I love sleep!  But I’m having a hard time falling asleep and then BAM!  I’m waking up really early.

I think, subconsciously, I am trying to make summer last longer. 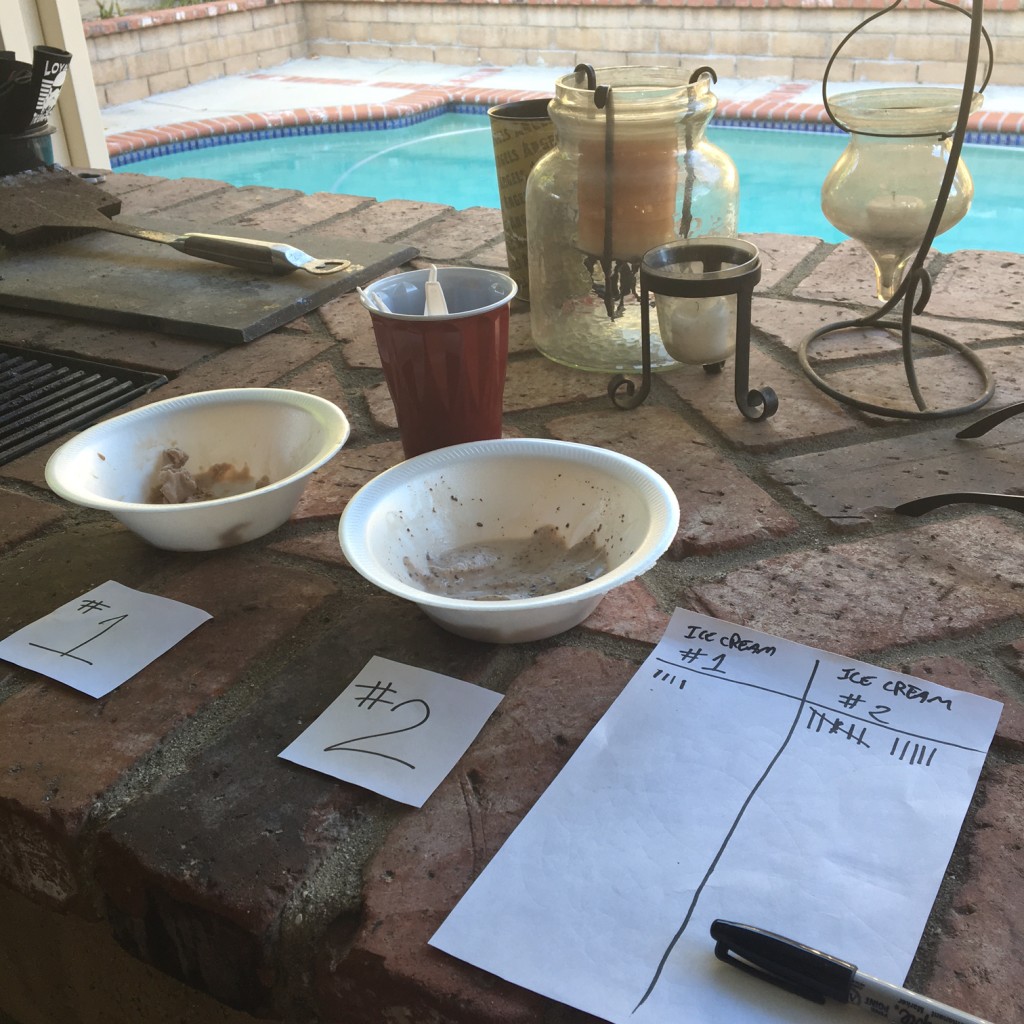 On Sunday, we celebrated Father’s Day at my older sister’s house.

And, if you’re not sure what extremely intense, super important, very formal home-made ice cream contest means in my family . . . just look at the picture.

My brother came up with the voting system.  Don’t you like the fancy borders, clip art, and fonts he used?

My brother and my older sister went head-to-head in the contest.  The rest of us were tasters.

Number One was chocolate ice cream.  Plain chocolate.  I love chocolate so there’s nothing wrong with that.

I liked both, but number two was a little creamier and had a little more flavor.

In the end, my brother lost.

But that’s okay because he just ate ice cream to drown his sorrows and, in my experience, ice cream makes everyone feel better, so he didn’t care all that much. 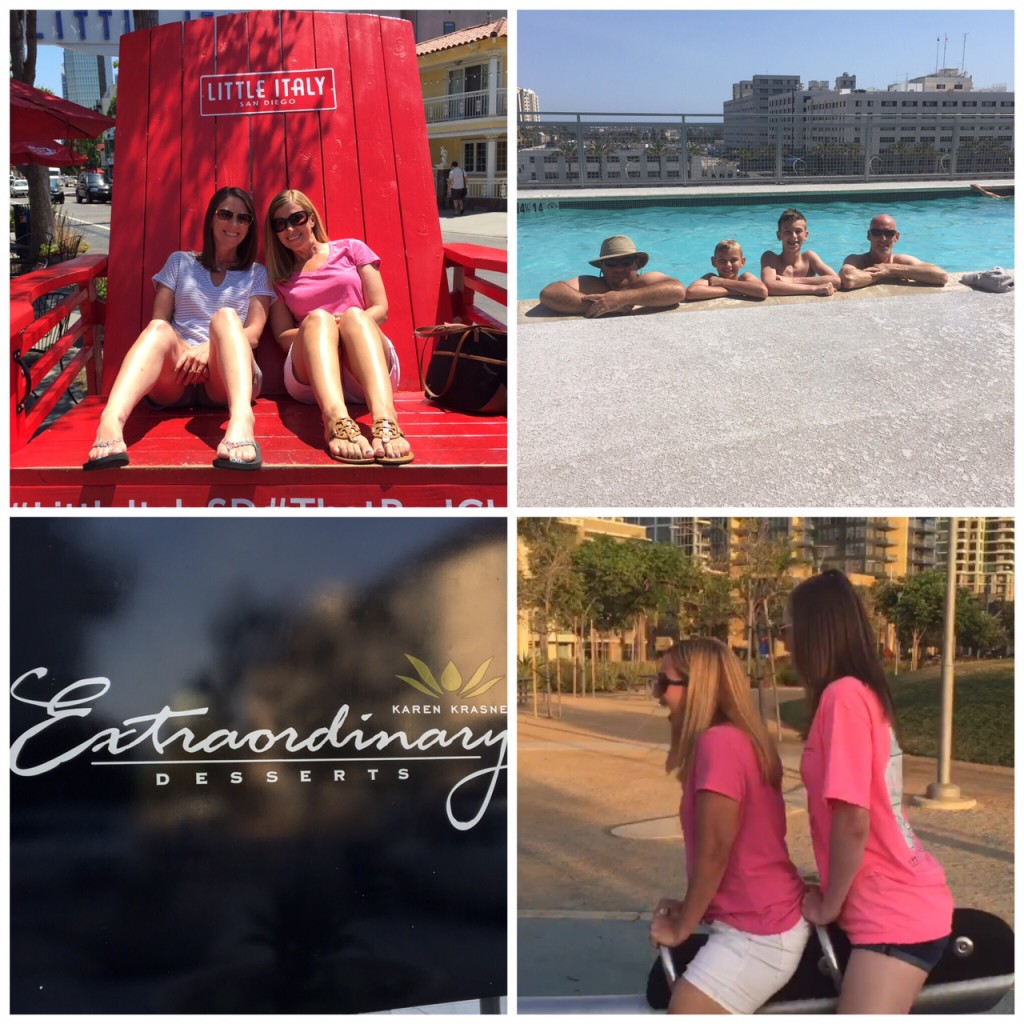 On Monday, my parents, Kerry, her family, Steve, and I went to San Diego to get out of the heat.  The weather was WONDERFUL!

We checked into our hotel and walked to Little Italy for pizza.  Then we headed back to the hotel for some swimming.  That {obviously} got our appetites going so we walked to Extraordinary Desserts for dinner.

Because why not?  It had been a whole day since we’d had ice cream!  We were having withdrawals.

Then we found a very fun park with a seesaw that seated two people on each side, and we decided we had to ride it.  First, we had to wait for a boy who was there before us.  He was being photographed while riding it which he might find embarrassing at a later date because he was wearing a cap and gown and was a high school graduate, apparently.

When he was finally finished taking all of his graduation pictures (I mean, he was a high school boy, isn’t he a little old to be on a seesaw?!) it was finally MY TURN!

So my niece, Madison, and I rode on one side and Kerry and my youngest nephew rode on the other side.

And then I don’t remember much after that because I was laughing so hard that I couldn’t breathe.

And then Kerry got off and MY MOM got on.

The next day we went to Balboa Park which you can read about {HERE}.

It was the best mini vacay! 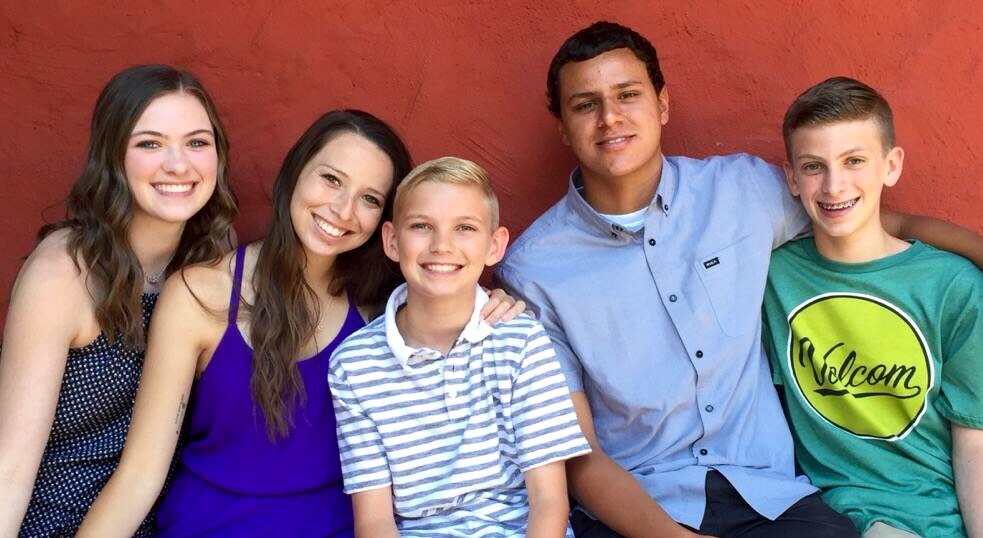 On Wednesday, it was graduation day for my oldest nephew, Jake.  We all went to lunch beforehand and then my mom said she wanted a picture of her five grandchildren.

Well, in a let’s hurry and get this over with type of situation, my sisters took their kids outside of the restaurant in order to do it.  Kerry said lets use this red wall as a backdrop and the rest is history.

I am telling you — ice cream makers, seesaw riders, and now photographers.  My family is TALENTED.  It’s like we need to take this show on the road.

Here are some of us after graduation.

Can you tell that we had just sat for over two hours in the blazing hot sun on BLEACHERS?  Because we had.

I also ran into a friend that I used to teach with in a very random way because neither of us teach in the area where my nephew graduated from, and it was just so weird to see her pass by in front of me.  What was even weirder was that the graduate she was there to see has known my nephew since they were three years old.

I seriously can’t go anywhere without being recognized.

My older sister even said so and reminded me of the time(s) we’ve been to Disneyland and I’ve ran into former students.

And demanding a bigger paycheck.

On Friday, I got to meet the girls for lunch because I was back down at my mom’s house, and these girls were close by!  Kerry came along, too, and got to listen to us talk teaching, blogging, TpT, and babies!

Just look at Hadar!  How cute is her baby bump?!

We also realized after the picture was taken (Kerry took it for us) that we are color coordinated and it was unplanned.

And spontaneously, Hadar and I kept our sunglasses on while Tara and Lauren didn’t wear theirs so we even have an every-other effect going on.

The only issue I see is that I have blonde hair and I’m kind of sticking out like a sore thumb.

However, and this is the most important thing, is it just me or do I look taller than Tara?

Because I’m pretty sure I look way taller than she does.  I’m practically a giant.

And I’m not standing on my tiptoes, either. 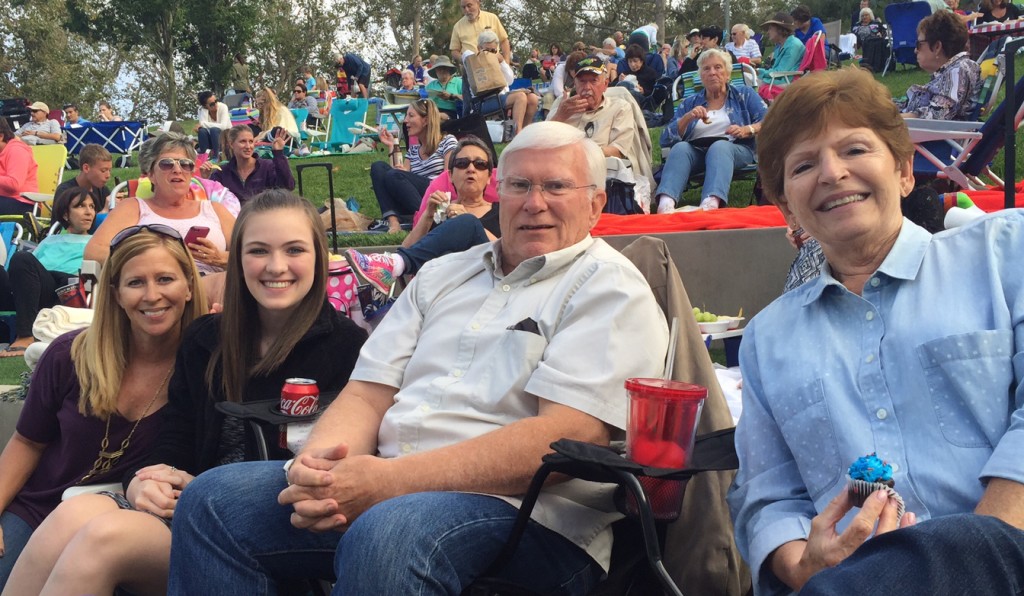 That’s a cupcake in my mom’s hand.  I get my healthy eating habits from her in case you were wondering.

On Friday night, Kerry, Madison, and I went to a concert in the park with my parents.

We sat way way way too close to the speakers.

We had a little picnic first, and then we listened to the music and watched everyone dance.  Dance is a loose term.  Some people had no control over their bodies and couldn’t help themselves.  Kerry and I were cracking up!  By the way, I love to dance, but I need a little liquid courage first, and liquid courage was prohibited.  So there you go.  It wasn’t my fault I was laughing at other people who had no clue I was laughing at them.

The music was from the 50s and 60s which is what I grew up listening to because it’s all my parents ever listened to (and it’s pretty much all they listen to now).  There were two groups of people at the concert.

I think I was closer in age to the little children running around.

I don’t know what’s on the agenda for today, but I do know I need to go to Target, and find some time to do nothing at all.

How was your week???