Thank you all for the Anniversary of my 16th Birthday wishes!

I am home from The River now.  I am not sunburned.  Just so you know, the Neutrogena 100+ sunscreen just made me tan.  I stayed in the shade at least half the time.  The other half of the time I was floating.  I drank A LOT of water.  Really.  Hand over heart.   I ate A LOT of Nacho Cheese Doritos and Chili Cheese Fritos and Funyuns (which I say I don’t like, but apparently I do if I’m hungry enough) and I stayed up late talking on the patio.

But now I’m home and we just picked up Murphie from the daycare place.

There was A LOT of talking and tail wagging and butt shaking.  And that was just me!

So now we’re going to have a good cuddle while I catch up on some shows (Hello?  The Bachelorette!  And the Orange County Housewives! And other reality TV shows I forgot about!).

But, before I go, I’ll tell you who won the Birthday Giveaway!  The presentation isn’t all that pretty because I’m feeling too lazy to go look for some cute border and background and frames and all that. 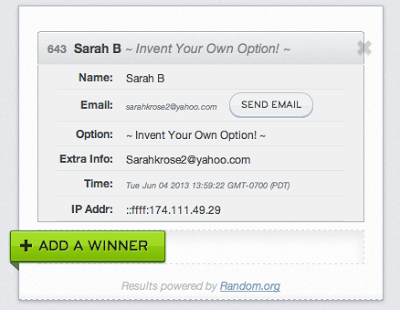 So, thank you, Sarah B. for playing!  You won everything in my store, plus a $10 TpT gift certificate.  Check your email soon!  It’s all coming your way.
As for the rest of you . . . I want you to know I am working on a new Reader’s Theater pack!  It’s easy reader types of plays, which I actually find quite boring, but that’s mainly because I don’t care what Brown Bear sees as long as he doesn’t see me.  But I get it.  Beginning readers need predictable text.  Big font.  Picture clues.  So that’s what the new set of Reader’s Theater is going to look like and I hope to show it to you SOON.  🙂  And I plan on giving one play away to EVERYONE just like last time.
Alright!  I’m off to rest because I was so lazy on my vacation that it’s starting to catch up to me.  🙂
« Happy Birthday Giveaway
Letter Storage »