Hey peeps!  I went Back to School shopping today.  With my teaching partner/best friend and her daughter who is also a teacher.  Her daughter used to teach at the Mall School which I talked about {HERE}, but now she is an Intervention Teacher at another school in our district.

Anywho, it was a big day with our local teacher store, Ruby’s for lunch, Nordstroms for . . . well, not for school, but Toms for my friend, some makeup for me, and a T-shirt exchange that I did for my hubs.  I almost NEVER shop at Nordstroms but the hubs loves it (Yes, I think the roles are reversed here).  Well . . . one of his super expensive t-shirts that is probably-not-necessary-when-an-Old Navy-t-shirt-would-do got some unfortunate discoloration on it.  And even though I do the laundry in a washing machine that is 16 years old, it wasn’t my fault.  It wasn’t.  But if this leads to a Jersey Shore GTL and I end up dropping our laundry off for someone ELSE to do, I am going to do the exact same thing with this new t-shirt.  Not that I know how it happened.

Then we went to Walmart and I got folders for 15 cents.  And that’s all.  And then we went back to my friend’s house, and we separated the goodies, and realized we’d left one bag of red folders at Walmart.  This is because they don’t put the bags in the cart for you.  They just leave them on the turnstile thingamajig.

Can I just say that I am not a fan of the turnstile thingamajig?

And that surely they need a better system if the guy who helps you when you return in the 101 degree heat to ask if 33 red folders were left behind says that this happens THREE TO FOUR TIMES A DAY?

I never knew red folders were such a popular item.

In the meantime, I am obssessed with a pin that I saw.  About pencils.

You’d think I’d have a system for pencils.  I mean, I’m organized and I hate clutter and I micromanage everything and I am very rigid and controlling.
So I actually do have a system for pencils.  I usually have a canister that says “Take One” and a canister that says “Please Sharpen.”  I’ve had variations of that over the years.  Sharp, not sharp, pointy, dull, bad pencils, good pencils, and more recently:  Don’t you dare put a sharp pencil in here–can’t you see it’s for broken ones??! and These are sharp pencils–why are you putting a dull one in–can’t you read and see the clipart picture??!
Every year, I say to my kids:  Please be the class that is going to do a great job of keeping our pencils organized.  And separate.  And not mixed up.
And they say they will.  They put their right hand up and repeat after me:  I will pay attention to the pencils so that my teacher does not go crazy and/or end up in an insane asylum.
But they don’t.
My friend says it’s the same with her class.
And then I found this pin: 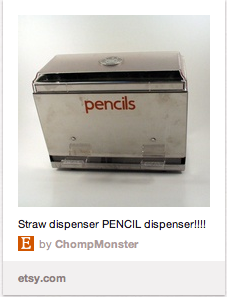 {source}
I’m obsessed with this.
Except I’m afraid it looks dirty.  Are those just fingerprints?
I found some others online that appear as if they are clear (as in, see through) . . . and a really pretty blue one from someplace in China but I can’t figure out how much it costs . . . and my hubby is, of course, worried that if I click on something, my computer will go haywire and the Chinese government will find out I have a blog and then they’ll come get me and . . . well, that’s as far as we can get in that scenario.
Do you think this dispenser would work??  I’m thinking it would.  I’m hoping it would.  And then any pencils that needed to be sharpened would go into a canister.  YES?  NO?  I don’t know.
I think two things could happen.
1.  It works perfectly.  My room fills with butterflies and rainbows and puppies and I am virtually Mary Poppins as I teach.
2.  The kids push that darn thing over and over and over until it breaks and/or they figure out how to get inside of it and they put BROKEN pencils in there.  For fun.
I just need a better system.
Or a glass of wine.
Or maybe we could write in pen?
Do you think this could really work?  What’s your system?
« Talk About It Tuesday
Math Fluency »