I can’t believe my two week break is over.  Waaaaa.

The good news?  Murphie is sleeping through the night now so I won’t be as tired.  As long as I take my nap during math or language arts tomorrow, I should be okay.

I’m here to tell you I’m a drama queen.  I don’t know if you could already tell, what with the tears and snot about returning to a job I absolutely love and actually consider more of a hobby.

I love drama.  As in THE THEATER, not drama that ensues on reality TV shows that I need to rewind and replay and ask, “Did she really just say that?  Holy crap, she did!”  (Okay, I love that kind of drama, too, as we all know.)  My mom and dad actually met through drama in high school.  Or actually on summer vacation through their high school.  Or was it through summer stock theater in Colorado?  I don’t know.  I know the play was called The Drunkard because that is entirely wholesome high school material and totally appropriate.

Anywho, their love for drama meant that they started a drama ministry in every church we went to growing up.  And my sisters and brother and I always got to play the kids in all of the plays.  The acting bug was hereditary or something.  Destined to be stars, ya know.

And then when I was in junior high and high school, I always tried to take drama as an elective.  That is, when I wasn’t taking some kind of creative writing course pretending that I could be a novelist.  Or when my nose wasn’t buried in a book.  Or when I wasn’t preoccupied with boys.  It just depended on my schedule, obviously.

Now my love for drama has transferred to my classroom in a center.  I have to thank my friend Christina because she had the idea first, and then I had to copy her like I always do.  Although you could use it for anything, really.  Language Arts.  Fluency.  Read to Someone.  Go Sit In the Corner and Read This – I’m Tired.  Anything.

It is THE FAVORITE center EVERY SINGLE YEAR. 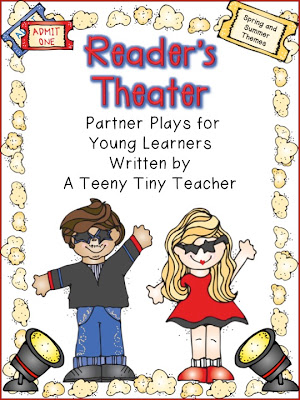 Sometimes, my kids take these out to recess.  For fun.
Back in the day, I xeroxed some plays from a teacher book of some sort.  They were okay.  Some of the plays had three characters.  Some had seven.  Some had four.  Some were long.  Some were short.  It was hard to manage.  But I was determined.  DETERMINED.
And then I had a brainstorm.
And that, my friends, is sort of dangerous because it can give you a headache.  But, in this case, it was good.
Here’s what I did:  I wrote my own stinking plays.  Two characters.  Short in length (like me).   It was hard to keep the plays short because, as you know, I tend to go on and on and ramble and never shut up.  But I did it.
My kids “rehearse” their plays during their center time.  (Only four kids go to this center on one day)  At the end of centers, I let them come up and do it in front of the class.  (Parent Volunteers think this is the greatest thing ever and I act like, “Aw, shucks.  It’s nothing.” while secretly patting myself on the back.)
Here’s a sample: 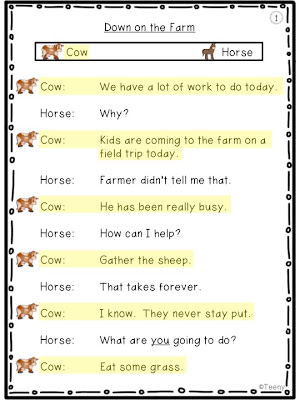 (Are you just dying to find out what happens?
Talk about riveting!  What in the world will Horse say?)
I organize them the way my friend, Christina, taught me. 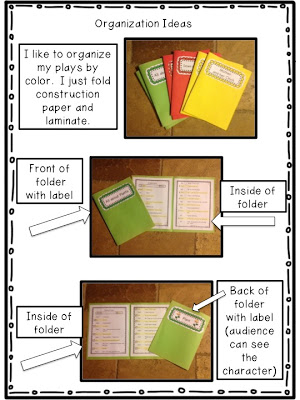 But you could also: 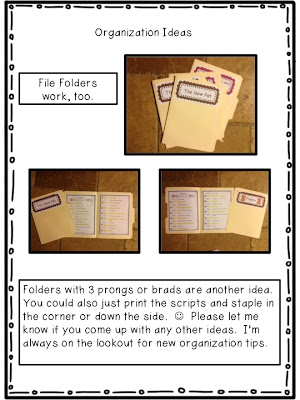 I wrote ten plays with spring and summer themes.  Each play has two characters and are two pages each.  If you have more students than plays, just make an extra set.  I’m always amazed when my kids try to out-perform each other.  I know it has nothing to do with my direction and/or acting chops.  I never butt in.  Never.  Stop looking at me like that. 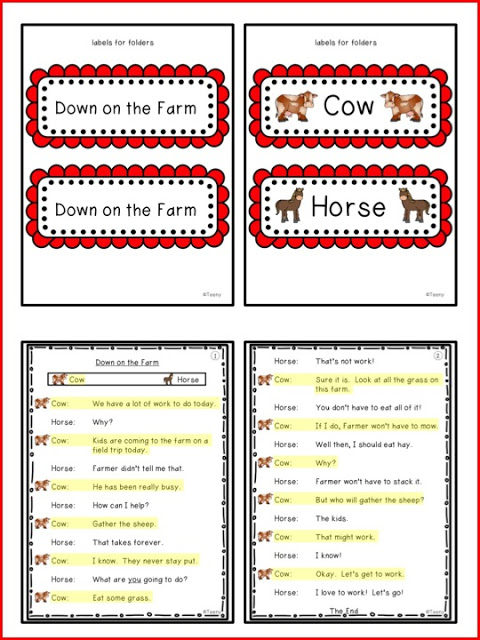 Click {HERE} to download this play as a freebie!
The rest are over at TpT in my store if you want to check them out.
I’ll give 3 packs away, as usual, if you leave a comment with your email address.
I’ll announce the winners tomorrow after work!  🙂
Have a great rest of your Sunday . . . I’ll be holding back my tears as the hours tick away.  choke*back*sob*hiccup*drama*queen*this*should*be*my*next*play*
« Five for Friday
The Wind and The Winners »