I just had dinner with two friends that I used to teach with . . . it was fantastic, as always.  Love those girls.  And the food.  I had a yummy half sandwich called “The Walnut That Kissed The Chicken”.  Or maybe it’s called the “The Chicken That Kissed The Walnut”.  Can’t be sure.  Plus I had a cup of “Cocky Leeky Soup”.  Don’t those titles alone make you want to eat at this restaurant?  It’s Rutabegorz.  They have lots of healthy items on the menu that I steer clear from, but I can definitely recommend some of their high-fat, high-calorie, high-cholesterol choices if need be.

Last Wednesday, it was early dismissal like always.  I walked my kids to the Back Gate in Far Away Land.  I had one little left over whose father forgot her whose father was late so I waited with her.  Meanwhile, I was worried I was going to be late to PTT and it was Staff PTT, not grade level.  So as soon as that father came, I walked veryfastveryfasttrottrottrot down the playground to the far ramp closest to my building, which happens to be near the library, which happens to be the meeting place of every PTT.

It would be a lot better if I could show you an actual picture.  All I can think is to have you picture a FOOTBALL FIELD and that’s what I’ve got to get across to begin climbing the ramp back up.  (Of course this is an exaggeration, but it IS far.  Really.  I don’t do feet or meters.)

Here’s a map that I whipped up.  So you can see. 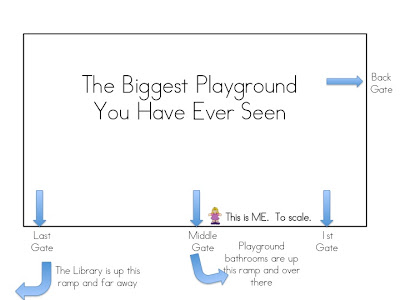 When I finally got to the ramp, the gate was LOCKED.

LOCKED.   I was locked in the playground.

I shook my head.  Growled.  Turned around and walkedveryfastveryfasttrottrot half way back to the “middle” ramp of the playground (third and fourth grade teachers tend to use that ramp) . . .

This was really unusual.  I go to the back gate every day at dismissal.  I do tend to vary my routes.  Sometimes I take the first ramp (for the fifth and sixth grade teachers), other days I may take the middle, and sometimes I just walk to the last one.  It really depends on who I see, who I want to see, my daydream, the shoes I’m wearing, the weather, etc.  You just never know.  But all three gates are always open.  Obviously.  I’ve got to get back onto school grounds.  My purse is there.

So when the middle gate was locked, I was stumped.  And panicked.  And LATE to PTT.

I debated going to the first ramp (which would make me even further from the library) and then decided against it.  (This is PIVOTAL, people.)

Well, I had my keys.

Had you going there for a minute, didn’t I?  Did you think I was typing this from the jungle gym?

I was worried my gate key to the grass area (completely different key and not worth discussing) would not open the gate to the ramp. BUT IT DID!

The tricky part was locking the gate back up.  I couldn’t just leave it.  I had to lock it back up.  Otherwise, I might get in trouble.  I guess.  I don’t know.  But I felt compelled to lock it back up.  I had to fight with it.  It was not easy.  The chain was short and the two gates wouldn’t meet in the middle. . . it was a dilemma, let me tell you.  Keys generally intimidate me . . . I am not good with keys.

While I was fighting with the lock, I heard a bang above me, near the playground bathrooms.  I looked.  Nothing.

I kept fiddling with the lock.

I looked again.  Nothing.

Cue the music.  Maybe from Rocky?  Or the Greatest American Hero?  (Flying away on a wing and a prayer . . . who could it be?  Believe it or not, it’s just me!)

Super powers overtook my hands.  I locked the lock.  Just like that.  JUSTLIKETHAT.

I flew (Literally.  With my cape) up the ramp, up the stairs, and towards the bathrooms.

And, people, it was one of our teacher’s kids.  A boy.  In the boy’s bathroom.  LOCKED IN.

I shouted at him that I had arrived.

Once I figured out who it was (I think he’s in fifth grade.  Teacher friend who reads my blog, am I right?), I told him I would get help. Actually, first I asked him why he couldn’t just push the door open.  He probably thought that was a dumb question.

Then I said I would get help, and to hang on, and we would get him out.  (Just for the record . . . no, my key would not open the bathroom door)

So I ran to the library.

People, I can’t run.  My heart does not work like yours.

So I would have to stop and rest.  (Much like Cameron Diaz in the movie The Holiday when she gets out of the limo to run back to Graham because she finally cried.  And as she runs, she stops and doubles over with her hands on her knees?  Do you know what I’m talking about?  That is a great movie.  LOVE.  Well, that’s how I did it.)

When I got to the library, PTT was in full swing.  I flung open the door (cue volume on the music — crescendo) and . . .

Our principal continued her speech (I forget what it was about) and so someone said, “I think Kristin needs to say something.”

His mom shot up out of her chair at the exact same time as our Assistant Principal.  The walkie talkie went buzz buzz and they both ran out.

Confetti rained down from the ceiling.

Everyone cheered.  “Hooray for Kristin!”

Later that night, I experienced post traumatic stress disorder from being locked in the playground.  But nobody seems to care about that.

Our over-zealous custodian is in a little bit of trouble.

That’s not my fault.  I mean, should I have just let it go and not gotten the custodian in trouble?

That’s what I thought.

Real heroes do the right thing.  Even if it’s the hard thing.

My teacher friend who reads this blog (and survived the telling of her son being locked in the bathroom) and I have talked about this.  And here’s the thing.

Also, that father who forgot his child who was late?  What if he had been on time?  I would have made it through that last gate and gone to the library.

Do you have chills?

I do, but I think it’s because it’s freezing cold in my house and I need to get my slippers.

Do you have any issues with keys like me?