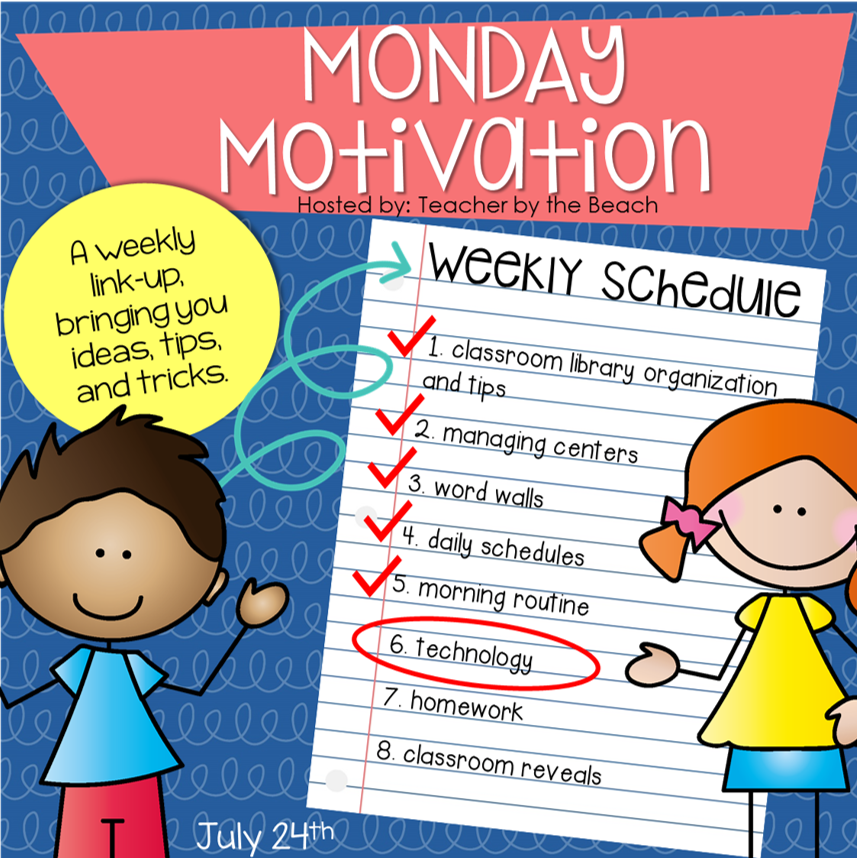 Today’s Monday Motivation with Teacher by the Beach is all about Technology.

I used to joke all the time that the only technology I had in my classroom was the telephone.

Because it was true.

When I first started blogging (6 years ago), I still had an overhead in my room.

Now I have a document camera.  She is my Ladybug and sometimes she can be grouchy.  Ugh!

Towards the end of last year, we got ceiling mounted projectors and speakers in the ceiling, and over the summer, we got a mimeo type of board thing that I just recently saw, and have not a clue how to use.  BUT I’M EXCITED ABOUT IT.

My main technology that I use EVERY DAY-ALL DAY is my classroom iPod.  I would die without it.  I don’t even remember, nor want to think about how I used to change CDs in the big ole boom box.  Kill me now. 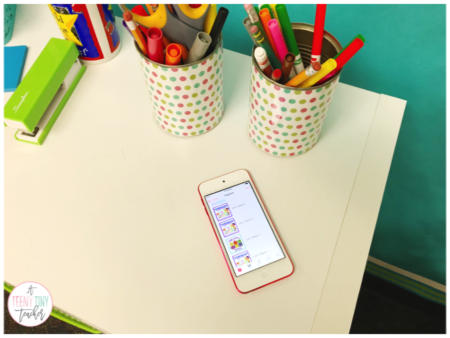 I just recently updated/revised/fixed my playlists to align with our new curriculum Benchmark Advance which offers HEIDI SONGS!  I am a huge fan of Heidi Songs, already own most of her songs, have attended one of her sessions, and have had the pleasure of meeting THE HEIDI on a several different occasions!  🙂  Heidi Songs are PERFECT for learning sight words, math, grammar skills, etc, but also just for playing during transitions!  I almost always play a sight word song during transitions so we’re getting extra practice, but also so that we are singing and NOT TALKING.  🙂  It is MAGIC, I tell you.  And then when your administrator comes in and your kids are transitioning, instead of seeing kids fall out of their chair, or slide into their carpet spot, or crawl like a baby, or hop like a rabbit, or take the longest route possible, they will be SINGING a sight word.  They’ll still do all that other stuff, but it will be EDUCATIONAL.  And all your principal will notice is that your kids are so adorable because they’re singing an EDUCATIONAL song.  TRUST ME.  I know things.  Get yourself some Heidi Songs!  🙂

Over the last couple of years, I’ve been collecting iPods and iPad Minis for Centers, and Groups, and Intervention, and whatever else you can think of.  I’ve put out pleas on my personal Facebook page, taken hand me downs from family and friends who are upgrading, and also stolen a couple of Steve’s right out from under him.  😉

One of my teammates sent an email to all of her parents asking for iPods or iPads and GUESS WHAT?  One of her families owned their own business and needed a write off, and the next thing she knew, she had 3 BRAND NEW iPad Minis in her hands.  So you just never know.  ASK.  ASK AND BEG AND ASK.  I have no shame.

After all of my hard work of being absolutely shameless, I now have 6 iPods and 6 iPad Minis.  WOOHOO!  I was SUPER tempted to buy some Kindle Fires during Prime Day.  I even put them in my cart.  And out of my cart.  And back in.  And then out.  It was a struggle.  But I finally decided against it.  I’ll ask people in my personal life for them instead.

I lock up my iPads and iPods every night before I go home (they have been home with me all summer and come home with me on Christmas break).  Every morning, I take them out and put them on the back counter.  My Teacher’s Pet plugs them all in because 1) they want to, they think it is THE GREATEST THING EVER and 2) I do not want to, not at all, not in the least, someone do this for me, please. 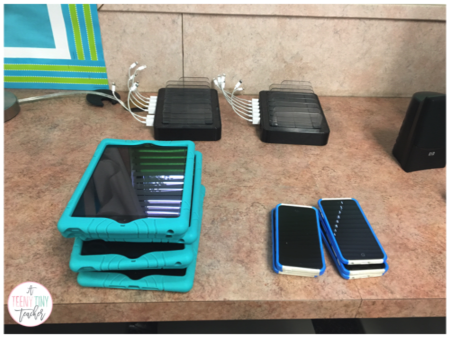 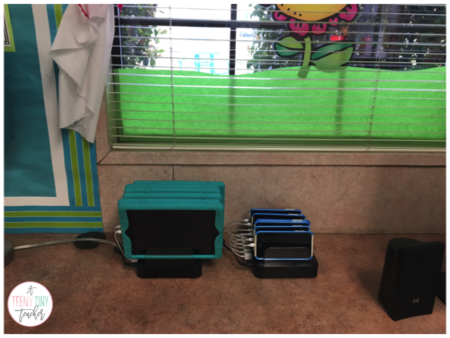 You can find the link to the charging station dock {HERE}.  Just the other day, I saw this super cool idea on Instagram for a lot cheaper!  LOOK! 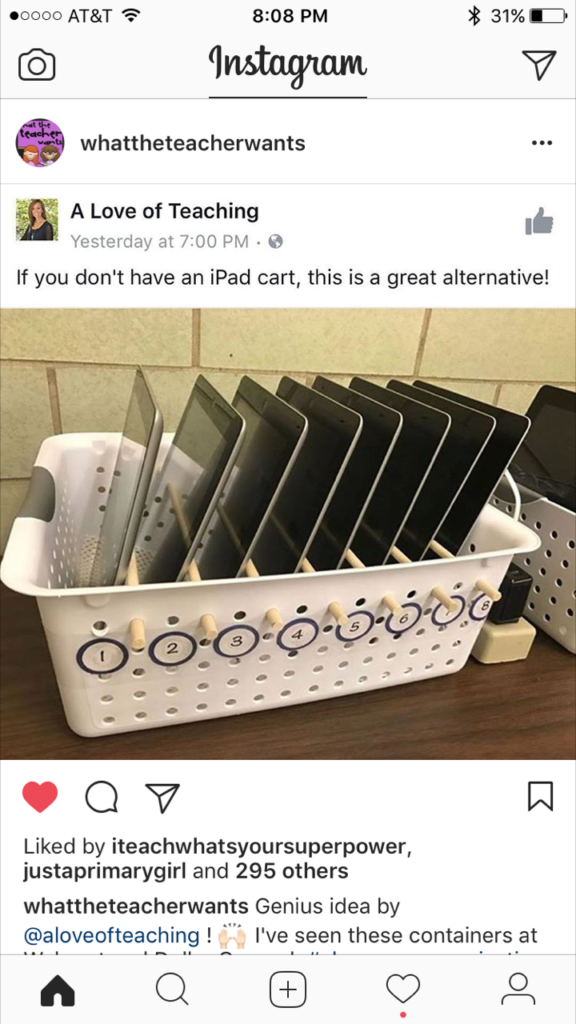 For each of my devices, I created a folder and titled it “Mrs. Oldham”, dragged everything in there that I didn’t want the kids messing around with, and moved it to the second page.  That way, when the kids get started, all they see is the stuff FOR THEM. 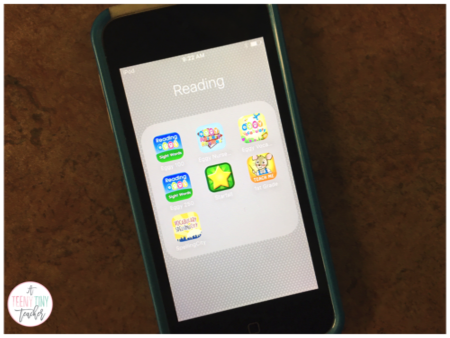 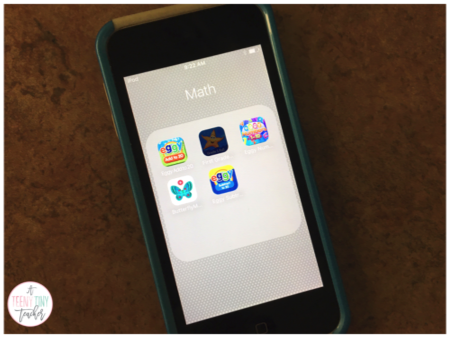 I also use the iPad minis in my Listening Center with my Listen and Learn Activities. 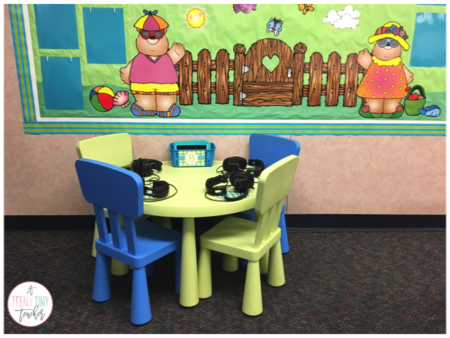 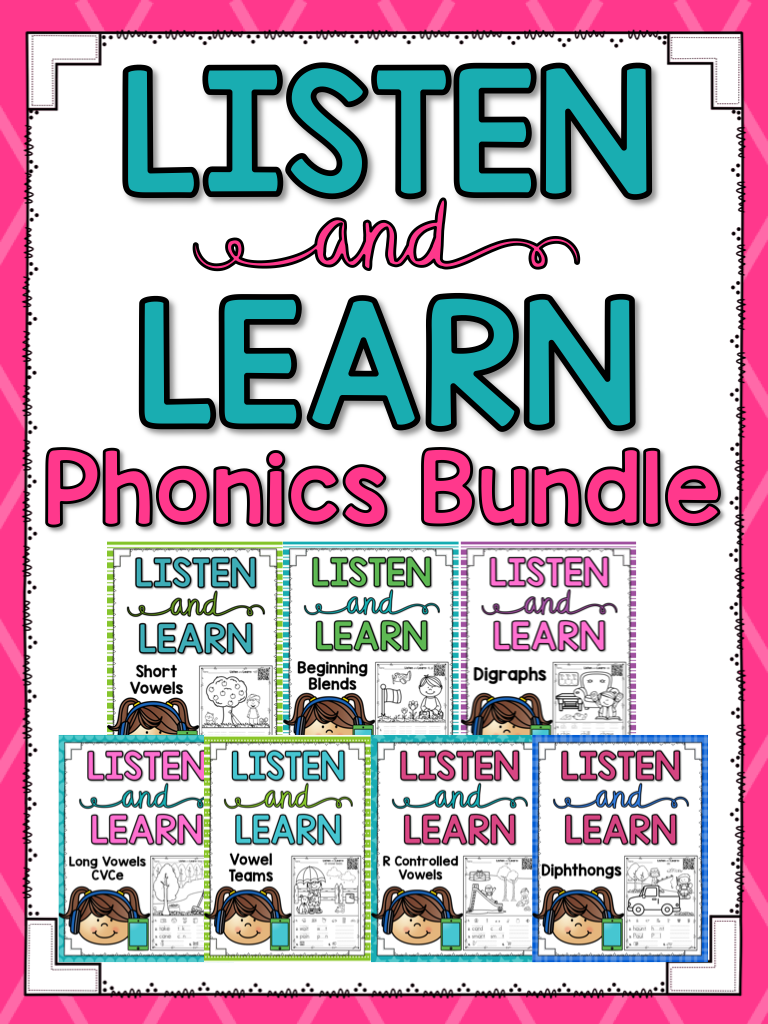 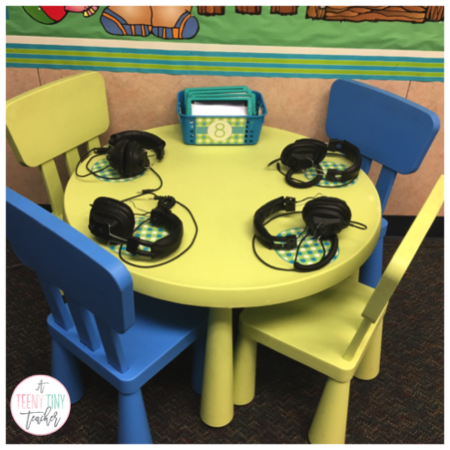 I made little round circles in PowerPoint, laminated them, cut them out and taped them to this table.  It really helps cut down on all of the cords getting tangled and blah blah blah.  I would love for each of my kids to have their OWN headphones or earbuds, but that hasn’t happened {YET}.  🙂

All of that being said . . . I do want to point out something.

Every once in awhile, I’ll have a “free” Fun Friday.  That’s where we just all turn in our gold tags without counting them, anyone can do anything, it’s a free-for-all.  The kids can play and do anything they want.  And almost EVERY SINGLE TIME, not one iPad or iPod is used.

My kids would rather play with Legos or Blocks or Play-doh or write in the Writing Center.

Isn’t that amazing?  It always makes me happy that they choose good old fashioned stuff instead of all the new 21st Century stuff that has to be charged and gets stuck and won’t turn on and and blah blah blah.

And, other times, it can drive me crazy.

I love to hate it and I hate to love it.