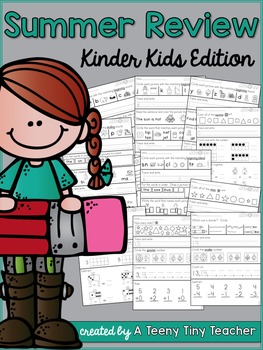 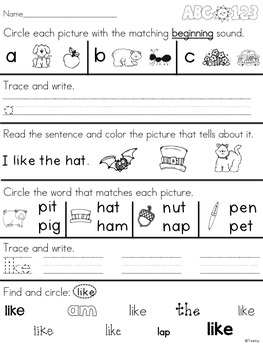 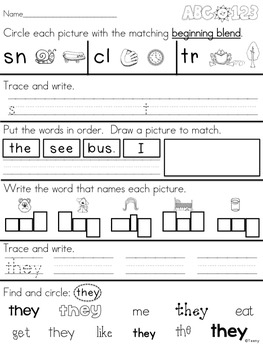 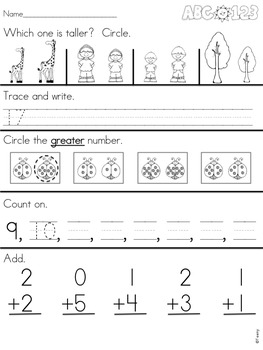 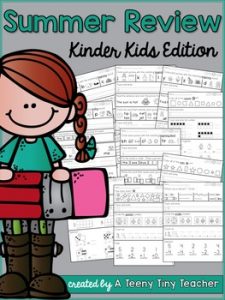 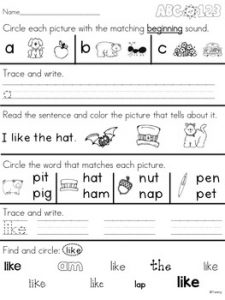 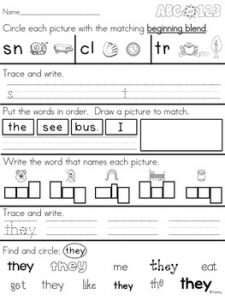 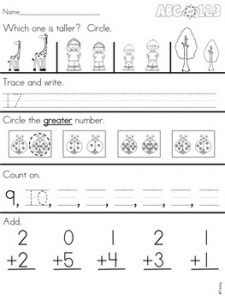 Summer Review for Kinder Kids – Language Arts and Math This pack contains 40 printables. You will find 20 printables for Language Arts and 20 printables for Math that can be used as a Summer Review Take Home Packet, Morning Work, Homework, as an Assessment, or as a Pre-Assessment for first grade. It can be used either for the end of the year in Kindergarten or at the beginning of the year in First Grade.

It is Common Core aligned.

In this pack, students will:

Print lowercase letters
Circle pictures that begin with a specific letter sound
Circle pictures that end with a specific letter sound
Match pictures to CVC words
Match pictures to beginning blends
Trace and write sight words
Find sight words
Read a simple sentence, then choose and circle the picture that tells about it.
Write missing beginning, medial, and ending sounds.
Put simple sentences in order
and draw a picture to match.
Write CVC and CCVC words.
Trace and print numbers 0-19.
Identify 2D and 3D shapes.
Count counters on a ten-frame and write the number.
Add and write corresponding number sentences using pictures.
Draw a given amount in a ten-frame.
Subtract using pictures.
Show ways to make 10 using a ten-frame.
Draw counters to continue a number sequence.
Write missing numbers in a number sequence, counting on from numbers other than 1.
Count on from numbers other than 1.
Count and record the number of 2D shapes.
Circle the greater or smaller number represented.
Add and subtract within 5.
Determine which objects are taller, shorter, and longer than other objects.

**It has been updated with two duplicates pages so that you can choose either “rhombus” or “diamond” for your classroom needs.

This pack was made with DJ Inkers Clipart.
DJ Inkers Commercial License #0812169270