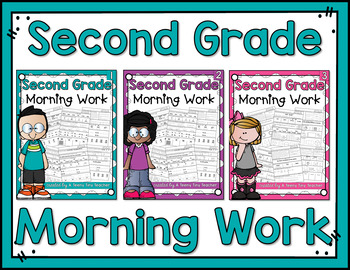 This is NOT digital, but it is perfect for students and teachers needing paper/pencil packets. You also have permission to email this to your students’ families and/or add it to any secure digital platform you are using.

Students will:
Edit sentences with correct capitalization, punctuation, and grammar.
Identify complete sentences.
Divide words into syllables.
Identify blends, digraphs, r-controlled vowels, and diphthongs.
Distinguish between short and long vowels.
Identify the vowel sound they hear in a picture.
Determine the type of noun based on a picture.
Determine the correct adjective and verb based on a picture.
Read a sentence and write the correct punctuation mark.
Spell sight words correctly.
Write a sentence based on a picture.
Identify antonyms and synonyms.
Choose the correct verb tense in a sentence.
Identify common and proper nouns.
Identify singular and plural nouns.
Identify pronouns.
Determine whether to use a plural or possessive noun in a sentence.
Look at a picture and write CVC, CCVC, CVCC, and CVCe words.
Unscramble words and write them in the correct order to make a complete sentence.
Write words in alphabetical order.
Underline base words and circle inflectional endings.
Choose the correct article to use when given word(s).
Determine the two words that make a compound word.
Read a sentence and color the picture to match.
Determine the conjunction to use in a sentence.
Write a subject for a predicate.
Write a predicate for a subject.
Read a short story and answer the questions.
Determine the meaning of words with prefixes and suffixes.
Count base ten blocks and write the number.
Draw base ten blocks based on a number given.
Write the number that comes one before, one after, and in between.
Write ten more than a given number.
Write ten less than a given number.
Write missing numbers from pieces of a 120 chart.
Compare numbers using >, <, or =.
Add numbers up to 20.
Subtract from numbers up to 20.
Add double digits (no regrouping)
Subtract from double digits (no regrouping)
Identify the time show on a clock (hour and half hour)
Draw the hands on a clock according to the time given.
Find 10 more, 10 less, 1 more, and 1 less for a given number.
Count by tens starting at any number.
Count by fives starting at any number.
Count by twos starting at any number.

Students will:
Write telling, asking, and exclamatory students with a picture prompt.
Put words beginning with the same letter in alphabetical order.
Identify soft c and hard c words and pictures.
Identify soft g and hard g words and pictures.
Determine whether a verb tense is past, present, or future.
Add commas to words in a series.
Write sentences using commas correctly.
Identify the two words that make up a contraction.
Write a contraction for two words.
Write compound words using pictures.
Write abbreviations.
Write trigraphs.
Use comparative and superlative adjectives correctly.
Read r-controlled vowels, long vowels, diphthongs, etc and circle matching words/pictures.
Identify two words with the same vowel sound.
Divide words into syllables and identify the open/closed syllables.
Write irregular plural nouns.
Identify collective nouns.
Identify root words.
Identify the parts of a friendly letter.
Add a suffix to a given word.
Use sight words in a sentence.
Identify the weaker/stronger adjective.
Read short passages and answer comprehension questions.
Determine whether a passage is fantasy/realistic fiction.
Make inferences after reading a short passage.
Look for synonyms/antonyms in a short passage.
Use text evidence to support answers.
Write missing silent letters.
Circle words with silent letters to match the correct picture.
Use linking verbs correctly in a sentence.
Write possessive nouns.
Use adjectives to expand a sentence.
Edit sentences with correct capitalization, punctuation, and grammar.
Order numbers from least to greatest, and greatest to least.
Write numbers in expanded form.
Determine how many hundreds, tens, and ones are in a number.
Determine if a number is even or odd.
Read word problems and create a number sentence using +, -, and =.
Read a number word and write the number.
Create number sentences to equal a given sum or difference.
Fill in missing numbers on various number lines.
Write missing addends.
Tell the value of a digit in a given number.
Use place value blocks to write a number.
Compare numbers using <, >, and =.
Add 3 numbers.
Add 3 digit numbers.
Subtract 3 digit numbers.

Students will:
Read sentences and draw pictures to match.
Write sentences using conjunctions.
Determine words that have the same vowel sounds as a picture.
Read passages and identify the best title, find synonyms and adjectives, and answer questions using text evidence.
Edit sentences with correct capitalization, punctuation, grammar, word order, etc.
Identify homophones.
Write reflexive pronouns in a sentence.
Write prefixes.
Use context clues to determine the meaning of a word.
Identify irregular verbs in the past tense.
Determine if a word is an adjective or adverb.
Write transition words in passages.
Writing missing nouns, verbs, adjectives, adverbs, and prepositions in a story.
Rearrange words to write a complete sentence.
Choose the correct adverb for a sentence.
Determine if a word should end in y or ey.
Identify multiple meaning words.
Determine words that belong together in a category..
Write the comparative and superlative form of adjectives.
Read a passage and determine if it’s informative, narrative, or opinion writing.
Write missing vowel sounds.
Rearrange the words in a sentence to write similar sentences.
Write sentences based on verbs and adverbs given.
Identify sentences with quotation marks used correctly.
Make inferences after reading a short passage.
Look for synonyms/antonyms in a short passage.
Use text evidence to support answers.
Write the time shown on a clock to the nearest five minutes.
Draw the hands on a clock for a time given to the nearest five minutes.
Determine A.M. and P.M.
Name shapes and solid shapes.
Identify quadrilaterals.
Identify shapes and solid shapes and their attributes (sides, angles, vertices, edges, etc)
Draw shapes to match given attributes.
Partition a rectangle into rows and columns of same-size squares and count to find the total number of them
Partition circles and rectangles into two, three, or four equal shares.
Describe the shares using the words halves, thirds, half of, a third of, etc
Use skip counting to count coins.
Determine the value of coins.
Count coins.
Answer word problems about money.
Draw coins to show a given amount.
Create addition problems for each place value in 3 digit numbers.
Add and subtract using regrouping.
Solve problems using information presented in a graph
Determine the tool needed to measure different items.
Measure objects using a ruler.
Draw lines according to a length given.